This Christmas, my mom decided to work on some doll clothes for my girls. Her first attempt was inspired by a traditional China Dress and some fabric she found at the fabric store. The outfit was originally designed to fit an L bust DD2, however I found it also fits well on an M bust!

The dress fits Sakura perfectly and gives her something new to wear aside from her default. Since she’s the only L bust in my collection, I don’t have much that was custom tailored for her…

END_OF_DOCUMENT_TOKEN_TO_BE_REPLACED

A couple weeks ago, I decided to try out the neck replacement part from Cool Cat. Similar to the one sold by Dollfie World, this joint promises to be more durable than the Volks default and provide a larger range of motion.

You can choose from pink or silver for your part, as well as for DD or MDD. They’re also reasonably priced at about $40 and ship from Taiwan.

Packaging is also very simple, all that comes with it is the joint and a spare set of screws for if you lose the original ones. So how does the joint compare to the Volks original joint?

END_OF_DOCUMENT_TOKEN_TO_BE_REPLACED

Poor Yoko, she must have felt terribly neglected since Rin seems to get the preferential treatment. She gets all the nice outfits, gets to go to conventions, and has even been to the garden twice! Well, the streak ended this weekend as Yoko finally got the chance to go out! Equipped with a new set of shoes from Mimi Woo, a pair of jeans from Mai Little Alien, and a top from Dark Dollhouse, she was ready to go out!

And here she is! It was a lovely day out, with the exception of the humidity. Yoko didn’t seem to mind though, she was outside!

END_OF_DOCUMENT_TOKEN_TO_BE_REPLACED

I’ve had a rash of Dollfie related updates lately and today will be no exception! After several months of waiting, Sakura has arrived at my home! Dressing Dollfies has become somewhat second nature to me by now, as has taking pictures of them in public places. I’m not sure whether or not to be happy about that or to be worried… ^.^;; 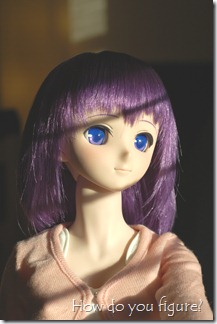 Isn’t she cute? The thing that took the most time was getting the wig on. It was hard getting it on in a place where her hair wasn’t hanging in front of her eyes. It was also the first time I’d used a silicone wig cap instead of a cloth one, so it took lots of adjustment to get everything in the right place!

END_OF_DOCUMENT_TOKEN_TO_BE_REPLACED

Here we go! The UPS carrier dropped off a box on my doorstep today, I wonder where it’s from and what’s inside? 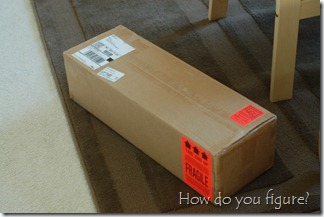 A close up on the shipping label should reveal some clues…

This could only mean one thing. Haruka’s head, body, and eyes have arrived! After getting my work done for the day, it was time to break the box open and check out the contents.

END_OF_DOCUMENT_TOKEN_TO_BE_REPLACED

After a tip from D.Ark about doll clothing seller Mimi Woo (on eBay and online), I started browsing for items for Yoko and Rin. Yoko needed some shoes to go with her new Candy Dots outfit and Rin is always in need of some new accessories. Sure enough, I saw an outfit so cute that I couldn’t resist. Over the next few months (maybe less?), I’ll be getting items together to create a custom Dollfie Dream based on IdolM@ster’s Amami Haruka!

The outfit I found was an exact match for what was used for the promotional material for the IdolM@ster SP PSP game, so I’ll be basing the doll on those pictures.

END_OF_DOCUMENT_TOKEN_TO_BE_REPLACED

I came home the other day to find a package in my mailbox from the UK. Finally, some more clothing for Yoko and Rin had arrived! The set was made by the wonderful webmaster over at Dark Dolllhouse. The set is called Candy Dots (for good reason, I think) and is the first “custom” outfit I bought!

Since Rin has pretty much gotten all the attention lately in terms of fancy outfits, Yoko decided to steal the set for herself!