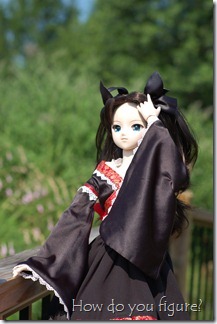 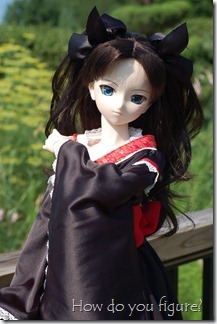 One of the challenges about this shoot was the weather. It was extremely hot even at 9:30am. The sun was out and humidity was up, making the mid-90s temperature feel much hotter. I’m glad that Dollfies aren’t really bothered by the heat, though I can only imagine what a person would feel like wearing that outfit…

It was so warm that I almost wished I could go under those water streams. Sadly, neither Rin nor my camera equipment would have done too well with it…

I resorted to looking for some shadier areas to shoot in, but even that didn’t give a whole lot of relief. There wasn’t much breeze that day either, so the still air just made it worse. 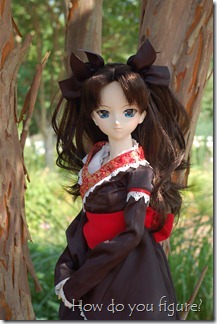 Nevertheless, the shade of the trees meant less sunlight. I wasn’t as hot and Rin’s fair complexion didn’t get overexposed as easily or get hit by odd shadows.

The garden was still running an exhibit of “artistic” seating arrangement. This particular one was made of a split tree branch and some netting. I didn’t try it personally, but it looks quite comfy. 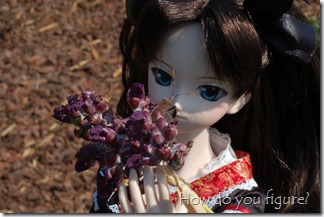 These shots came together completely by accident. I went to pose Rin for looking at the flower and started shooting. Then I noticed something moving on the branch. The insect made for a great bonus! I’d recommend checking out the full size versions of both if you can’t spot the insect in the smaller versions. ^.^ 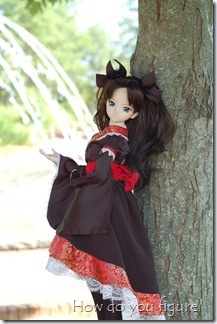 The tripod mounted stand gave me a lot of versatility in shooting different scenes. I really liked the added height and allowed me to pose Rin in such a way that made it look like she was more full sized. 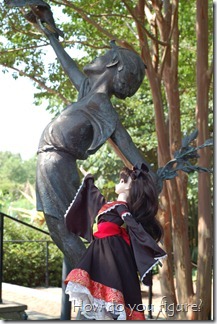 When I first saw this statue, I thought it would be a perfect shot to mimic. I’m considering entering this into the garden’s photo contest this year… I wonder if they’ll take dolls as subjects?

Despite the hot weather, it was a great outing that yielded some really nice shots. The low traffic made it much easier to set up and shoot, nor did I have to wait for the background to clear out.

5 thoughts on “Rin goes out… again”

Before coronavirus: let me out of here! After coronavirus: this is fine - - - #dollstagram #mdd #volks #dollfiedream #dollfie #illyasvielvoneinzbern #socialdistancing
Was out at the store yesterday and saw a display of masks and hand sanitizer. I was intrigued so I went back to check prices. - - - #coronavirus #covid19 #crazyprices #toohigh #handsanitizer
I spent a lovely weekend with my beautiful @jayleeryai in Nashville this weekend! I surprised her with a ring and a question while sitting in front of the Nashville Parthenon, containing a replica of a statue of Athena, and under the watchful eyes of a multicolored dragon with a mermaid tail. 💍 - - - #nashville #engaged #lovey #gamingcouple #shesaidyes #randomdragon
It's restaurant week! Tried out the Global Restaurant last night. Food was very good! Pork belly appetizer (second picture) was tender and crispy, and the spare ribs (not pictured) were super tasty. Also tried the Mahi (first picture) and it was really good! 👍 - - - #charlotterestaurantweek #food #globalrestaurant
We didn't have any backdrops or props at the doll meet, so we built our own! - - - #volks #dollfiedream #sherylnome #macrossfrontier #smartdoll
Kit hangs out at @aroundtheworldclt! Doll made by @shecow - - - #kit #artistdoll #bjd #dollstagram #casual