Last week, I talked about the physical aspect of putting together my triple monitor setup. Since then, I’ve had a few questions around the hardware and software setup that lets me drive the three screens. The setup itself is not that complicated, however I did learn a few things that weren’t totally obvious. 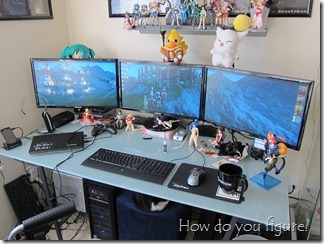 When setting up more than two monitors, it’s important to pick your video card wisely. Most cards, including many consumer and entry level cards, will support two screens out of the box. When shopping for a card that supports more than that, be sure to check the specs to make sure it supports the number of screens you want. Also, your main use of the setup will guide how much you may want to spend. A gaming setup will need a more powerful card(s) than one that is only used for productivity.

I chose a Radeon HD6870 from Sapphire as the basis for my setup. At the time of purchase, I only had two screens and used it primarily for playing Final Fantasy XIV. My card featured two DVI ports, one HDMI, and two Mini DisplayPorts. More importantly, the card supported AMD Eyefinity. More on that later.

Even though there are five outputs, this particular card will only support up to four monitors: two DVI and two via DisplayPort. However, if your monitors do not have native DisplayPort inputs, you will only be able to drive two DVI monitors out of the box. How do you get around this? The expensive way is to buy a matching card and run them in Crossfire (AMD) or SLI (nVidia) mode. This would effectively double your video processing power but also drive up the cost, require a motherboard that supports this configuration, and a power supply that can feed two power-hungry GPUs.

The cost effective way is to get an adapter to convert the DisplayPort (or mini DisplayPort depending on the card) to DVI. There are a lot of adapters on the market that do this, but be careful when buying one! There are two types: 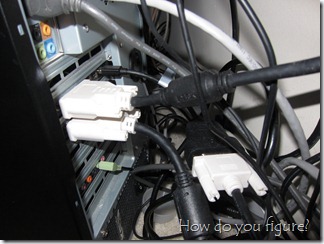 One you get all the hardware in place, it’s time to set up the software. Since I have an AMD card, I’ll be covering that setup process. nVidia users should have a similar experience.

Provided you have all of the right adapters, your system should boot up and recognize all three displays. If you are just setting up for productivity, I would recommend using the Windows control panel: 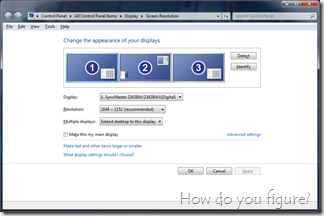 Here you can arrange the displays as they are on your desk, enable spanning across all screens, and set the main display. The main display is where your start menu and task bar will live. Keep in mind that the numbers are somewhat arbitrary, usually in the order that the GPU recognizes them. In my case, the DisplayPort screen is identified as 1. That doesn’t really matter much, as long as they are arranged in the right way here.

If you are going to want to game across all three screens, you will need to set up an Eyefinity group via the Catalyst Control Center. Most games won’t recognize multiple monitors out of the box, so even “full screen” mode will only maximize to your main monitor. What Eyefinity does is combine all of your displays (or the displays of your choice) into a single display. Instead of having three distinct displays, Windows and all applications will see one high resolution display. 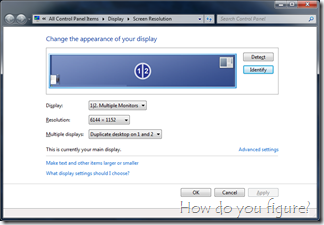 When you maximize a window in this mode, it will fill all three screens, instead of just one. To set this up, fire up the Catalyst Control Center (CCC), navigate to the Eyefinith Multi-display section, and create a group. Follow the on-screen prompts to arrange and set up the monitors the way you want them.

Once that’s done, it’s now time to set up the games you’ll be playing. Since this is a much higher resolution than you were used to playing on before, you will likely have to tweak some settings in order to keep the frame rates up and in a playable range. Also, be sure to set the resolution properly and select the full screen option to get the maximum effect!

Lastly, since I usually switch between the Eyefinity setup and “standard” desktop setup quite frequently, I created some presets in the CCC. This allows me to easily go between the two via the CCC menu on the taskbar:

To set up a preset, arrange your displays to how you want them via CCC, then click “Add Preset.” Then change the settings to the alternate configuration and add another preset. Here you can see the two presets I’ve created, one for the Eyefinity spanned mode (for gaming) and the other for the standard 3 screen mode (for productivity). 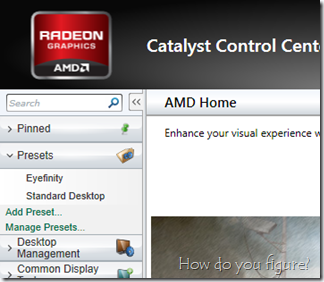 Once everything is set up properly, give it a go with your favorite game. It’ll probably take some getting used to, but in many games, having the extra real estate is worth it!

2 thoughts on “Setting up 3 or more monitors”