Sometime last year, I started playing an online game called Pangya. Simply put, it was an online golf game which featured lots cute characters that you could customize and dress up. At the time, a new character was just released into the world and she quickly became my “weapon of choice,” even though the amount of accessories available were still pretty limited. Meet Lucia, the pop idol! 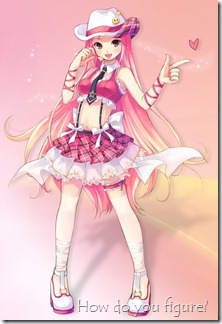 Imagine my surprise when I found out AmiAmi was putting out a figure! After examining the preproduction photos, I decided it was worth putting a preorder in. A few weeks ago, she finally arrived and joins my collection.

The first thing that I noticed about Lucia was the build quality. AmiAmi did a good job creating a solid figure with very little indication of seams or manufacturing imperfections. The paint job is also well done with vibrant colors. The only thing that threw me off was the outfit, as it wasn’t one I immediately recognized from the game as her default. 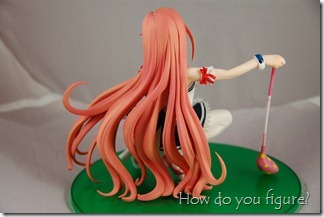 I really like the way the hair is frozen in motion. It suggests a light breeze instead of a constant gust of wind. After all, it’s easier to play golf when the wind is light! 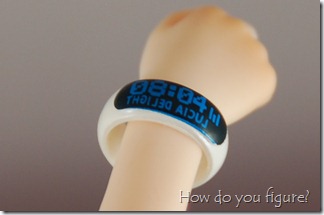 One of the interesting details that I noticed later on was her wristband. it looks like a watch of some sort, along with a signal bar. Maybe it doubles as a cell phone? Also, why is Lucia Delight printed backwards…? What a mystery!

Her club is actually not permanently attached to the base or hand. Friction pretty much holds it in place and is prone to getting dislodged when the figure is moved. The stylized name is a nice touch! I was sort of hoping for a club that fit her musical personality, like something from the mic set? 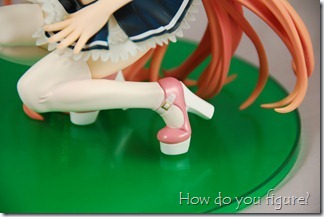 One of the things I never understood was how she could play golf in shoes like that. I’d imagine heels like those would affect your swing, especially if you’re in a bunker. Perhaps she only puts those on for the glamour shots… 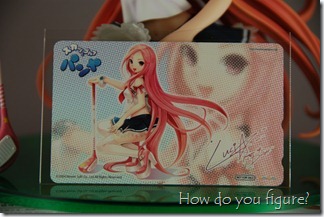 Lastly, she came with a limited edition phone card with the concept art that the figure was based off. I have no idea what the value is on the card but it’s valid for the Japanese pay phone system. A nice extra to be sure!

One final shot of Lucia! Her dress is actually loose on the body, but there doesn’t appear to be a way to remove it. Somehow I don’t think she’d work as well as a castoff…

One thought on “New figure–Lucia”

It's restaurant week! Tried out the Global Restaurant last night. Food was very good! Pork belly appetizer (second picture) was tender and crispy, and the spare ribs (not pictured) were super tasty. Also tried the Mahi (first picture) and it was really good! 👍 - - - #charlotterestaurantweek #food #globalrestaurant
We didn't have any backdrops or props at the doll meet, so we built our own! - - - #volks #dollfiedream #sherylnome #macrossfrontier #smartdoll
Kit hangs out at @aroundtheworldclt! Doll made by @shecow - - - #kit #artistdoll #bjd #dollstagram #casual
My #2019bestnine is filled with posts related to DollPa and Icons. #volks #dollfiedream #dollpala
My old Sega Genesis still works. Kind of weird running it on a 4k TV... #retrogaming #sega #sonic #sonicthehedgehog
Merry Christmas everyone! Unfortunately I'm bed ridden with the flu, so I got some masks to keep my germs from going too far and getting anyone else sick. Drinking lots of fluids, eating soup, taking Tamiflu, and laying in bed. I look worse than I feel, maybe? - - - #merrychristmas #flu #fluseason #sickinbed #happyholidays #selfie