First, a bit of business. Apparently I hit the 100 post mark without even realizing it. It was a great 100th post too, featuring Rin at the garden. I can’t think of a better way to celebrate hitting a milestone than with pictures of Rin.

Moving on now to the main event! A couple weeks ago, I made a trip to the gorgeous state of Hawaii. This was purely for vacation, so I tried to leave work mostly behind. A trip wouldn’t be complete without a ton of photos and I’m happy to provide!

Starting with this wonderful wide angle panorama of the Waikiki area from the top of Diamond Head crater. The hike was about an hour in each direction and offered some of the most spectacular views of downtown Honolulu. For this trip, we limited ourselves to staying on Oahu. Even though it’s an island, there was plenty to explore!

One of the most amazing things about Hawaii was the diversity of flora and fauna. Oahu itself is home to about a dozen microclimates, from tropical rainforest to dry. One of the things I wanted to do above all else was just get in the car and explore. That lead us to seeing all sorts of interesting things that you’d be hard pressed to find on a map. 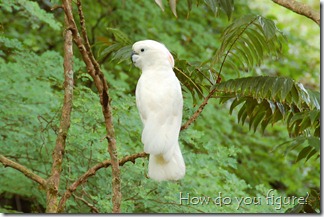 Above ground, the extremely colorful birds caught my eye. At Waimea park, there was even a group of peacocks and peahens hanging out! In addition to these more “tropical” birds, wild chickens and roosters were everywhere. They seemed to be alongside all the roads, in parking lots, and even on the beaches! This one in particular decided to make use of a van’s rear window… Hopefully no presents were left behind!

In the water, the word color took on a whole new meaning. I did plenty of snorkeling at several points, including Hanamau Bay, Shark’s Cove, and places along North Shore. If you remained still, the fish would just swim around you and pay little attention to you. It was pretty amazing. There were even big sea turtles! 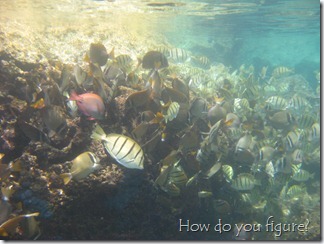 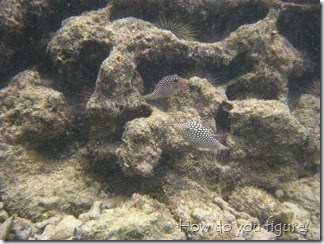 Unfortunately, I was at the whim of the water conditions when it came to picture clarity. When the water was calm and the sun was out, pictures came out extremely sharp. When the water got choppy or sand was stirred up, clarity suffered somewhat. I also took plenty of video, which I managed to cut together and put to music!

Snorkeling in Oahu–Music by Jake Shimabukuro

But enough about the birds and the fish. Now on to the food! Hawaii is rich in culinary delights, from island fare all the way to the best Asian Cuisine in the United States. The latter is due to the large Asian immigrant population (mostly Japanese) and whole sections of the island are dedicated to these.

Plate lunches are incredibly popular and typically feature a meat (in this case hamburger steak), two scoops of rice, some veggies, and gravy. This particular mean was at the Dole Pineapple Plantation and was accompanied by fresh pineapple juice. 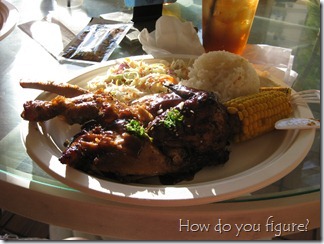 Other popular local fare includes barbeque chicken and pork served along side island corn and cole slaw. This was at a restaurant on a side street in Waikiki, but I could smell it from the main road! 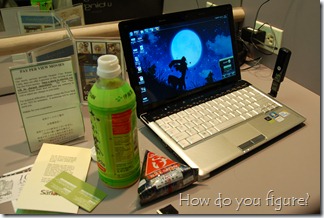 Don’t be confused, by this picture! Despite the Japanese text on the sign, bottle of Oi-ocha, and convenience store onigiri, this was actually taken one morning at the hotel in Oahu. Coincidentally, I stayed at the Hotel New Otani, a Japanese chain. 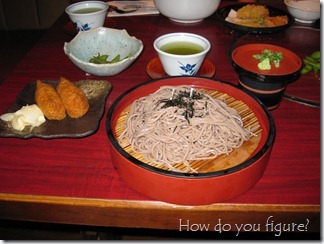 Some more evidence of the Japanese influence in Hawaii. This was probably some of the best cold soba I’ve ever had outside of Japan. Even the restaurant itself had a nice atmosphere!

One thing to keep an eye for in the North Shore area are the numerous shirmp farms. Most will have a small restaurant attached, serving up a variety of dishes ranging from boiled shrimp in garlic sauce to deep fried coconut shrimp (pictured above). Yet another example of a plate lunch!

Of course, no trip to the islands would be complete without a buffet style luau. Even though most are extremely tourist-ized, the food is still amazing and delicious! 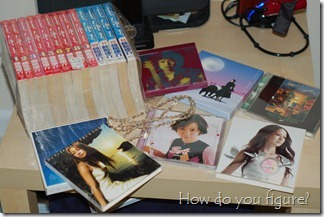 No trip would be complete without loot. With the large Japanese population, there was bound to be somewhere I could pick up some nice items. Sure enough, there was a large Japanese department store called Shirokiya in the Ala Moana shopping center. In addition to being two floors of Japanese goods (electronics, appliances, and clothing), there was also a full service food court offering up freshly made crepes (stand was named in reference to the Harajuku district in Tokyo), bento boxes, taiyaki, takoyaki, sushi, and drinks galore. There was also a bakery with fresh goods downstairs. For the otaku in me, the real gem was the Book-Off that was nestled in the corner. Just like the Japanese counterpart, it featured used DVDs, CDs, and books. I landed myself several CDs, including a couple Mika Nakashima albums, Satsuki Ami disks, and Do As Infinity. I also managed to find a set of the first 13 volumes of Aa! Megami-sama for $6.50!

For those of you that are curious about the equipment used on this trip, it was actually quite simple. I brought two cameras with me and a couple accessories. First was the Nikon D50 with Nikkor 18-200mm VR lens. Most of the outdoor and scenery shots were done with this. The versatile range of the lens meant I only had to have the one lens and not have to worry about changing. The second was a Canon SD1100 IS. This served as my pocket camera for going around town and when I didn’t feel like bringing the SLR. I also did all the underwater shots with this camera, with the aid of a $30 DiCaPak underwater enclosure.

In all, it was a pretty amazing trip. Thank you Hawaii, for all the wonderful memories. As the song goes, “Aloha’oe, until we meet again!”

For more pictures and videos, be sure to check out the full set on Flickr!

2 thoughts on “A week in Hawaii”