Since I only talked about Yoko last week, I figured I’d give the new Figma arrivals some time in the spotlight.

The latest addition to the family include the Summer uniform versions of Kagami, Tsukasa, and Miyuki. They’d arrived from AmiAmi, “The biggest internet FIGURE shop in Japan.”

Unfortunately, Kagami came in damaged and one of her twin tails arrived detached. It seems that the joint there is somewhat flimsy and prone to breaking. 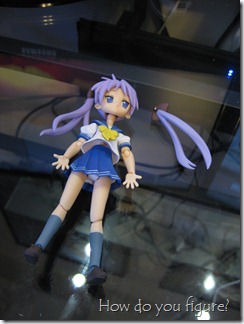 Fortunately, a quick email to AmiAmi support explaining the situation got me a good result. They’ll be sending me a replacement! Kagami is overjoyed at the news, but still mourns the loss…

With Kagami taken care of, I set to the task of opening the other two boxes. I’ve learned to check each joint on new figma for stiffness and make sure each one moves properly. Past experience has shown that some joints (shoulders in particular), require loosening up before they can be safely moved. In this latest batch, Miyuki’s shoulder joints needed some work.

I’ve learned that a short soak in warm water works wonders in loosening up those stubborn joints. After a few minutes, Miyuki was good to go!

It’s a joyous occasion as the three get acquainted, though Kagami is still a bit distraught over the loss of her twin tail. This was the first time I’d ordered from AmiAmi since their English site was launched and I’m happy to report that the experience was positive. They were quick to ship after payment was delivered, though there was a bit of a delay once it reached the US. It took a little over a week for the shipment to arrive from Japan, however it spent the next month in a half somewhere in the US Postal system before it was delivered.

Since the experience was positive, I’ll be glad to do business with them again in the future. Unfortunately for me, they’re offering half off on international shipping for all orders shipped in February. As a result, I’ve placed an order for several Di:Stage sets so I can better organize and display my figma. Hopefully this shipment will arrive faster than the previous one!