Yes, I know, it’s almost February, so isn’t it too late to do a loot post for January? Nonsense! all of the new toys featured here arrived after the new year (despite shipping in December).

I got two packages in earlier on, one from HLJ and one from AmiAmi. It was my first order from the latter, so was curious to check out their service level. So without further ado, let’s get to the goodies!

First up is a brand new Yoko figure from Max Factory. Called the “Real Image Ver.,” this is a 1/6 scale representation of everyone’s favorite sniper from Gurren lagann. Unlike the figures that came before, this one is a reimagination of Yoko and shows us what she might look like if she were a real person. The sculptor really did a good job with it and I’m very impressed with the details that were included.

I’m still not quite sure if she’s proportioned properly, but you just can’t say no to those eyes. She also comes with an interchangeable front hairpiece so she can be displayed with or without her sniper goggles. 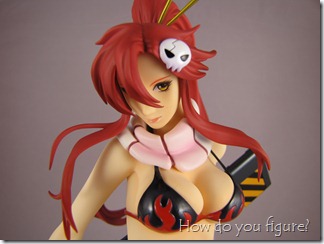 I don’t know about you, but there’s something sinful about that gaze… Finish on the figure is excellent and I haven’t been able to find any noticeable seams or imperfections in the cast. Even the joint where the hair piece meets the head is extremely well hidden.

Details on the gun are pretty good as well, though nothing will approach the level of detail found in the one provided with Kotobukiya’s rendition of Yoko released last year. That one had interchangeable clips, required assembly, and a moving bolt!

I do have one slight complaint about the figure though; it is incredibly shiny. Yoko’s skin is the nice matte finish I’ve come to expect, however most of her clothing has an odd luster to it. While I can see that making some sense for the leather bits, even her stockings, arm guard, gloves, and bracelets are shiny. If translating this to an actual material, I’d say it would look most like vinyl or pleather. Last I checked, Yoko didn’t wear vinyl or pleather… it wouldn’t be easy enough to move in. It looks a bit tacky, to be honest.

My other concern is the way the figure is mounted and positioned. As you can see from the shot of the base, it’s only attached in one point. Given Yoko’s…top heavy stature and pose, I’m curious as to if this figure will suffer from leaning. I would have felt a little better if she had another support somehow, though that may have compromised the dynamics of the figure.

On a positive note, Real Image Yoko looks good alongside her counterparts on the “Yoko shelf.”

I quite like these real image version figures that have been coming out as of late. For me, it started off with the Saber figure from Gift. I still much prefer the realistic style head that she came with. To me they just feel a bit warmer than the traditional anime style. It seems that Max Factory is doing more experimenting with their upcoming Kagamine Rin and Hatsune Miku, which will undoubtedly be hits. Even though I’m mostly impartial to the Vocaloids, the Miku one quite strikes my fancy.

Also, I broke out a new piece of equipment for this session. I received a portable photo studio for Christmas and finally decided to try it out.

It’s a pretty simple set and comes with a collapsible light box, two high output daylight fluorescent lamps, and a tripod. I’ve only just started experimenting with it and you can still see the remnants of my previous lighting setup, though I hope to be able to add some color for future shoots. Sadly, I don’t think a Dollfie would fit in there…

We didn't have any backdrops or props at the doll meet, so we built our own! - - - #volks #dollfiedream #sherylnome #macrossfrontier #smartdoll
Kit hangs out at @aroundtheworldclt! Doll made by @shecow - - - #kit #artistdoll #bjd #dollstagram #casual
My #2019bestnine is filled with posts related to DollPa and Icons. #volks #dollfiedream #dollpala
My old Sega Genesis still works. Kind of weird running it on a 4k TV... #retrogaming #sega #sonic #sonicthehedgehog
Merry Christmas everyone! Unfortunately I'm bed ridden with the flu, so I got some masks to keep my germs from going too far and getting anyone else sick. Drinking lots of fluids, eating soup, taking Tamiflu, and laying in bed. I look worse than I feel, maybe? - - - #merrychristmas #flu #fluseason #sickinbed #happyholidays #selfie
Thanks to @shecow for this lovely hand-made Kit! I still need to come up with a name... - - - #bjd #artistdoll #artistdolls #shecow #resinbjd