Today, my long awaited Kotobukiya Yoko arrived in my mailbox. I’d also recently received Ban Dai’s rendition of Yumemiya Arika in the past few weeks, so let’s take a look at these newcomers. Rin is also new to my family this month, but since she already got her own post, I won’t talk about her here.

First, let’s get Arika out of the way. I’d bought her from another DannyChoo member through the classifieds section. Since I didn’t have any Mai-Otome figures, I thought I’d jump at the opportunity. Unfortunately, Ban Dai really isn’t known too well for their figures (more for the Gundam Models, I think), so quality isn’t very high. There are a few places where the paint isn’t spot on (there’s a decent amount of bleeding on the underside of the figure) and a couple of edges are a bit rough (like around her hands). There are also some noticeable joins in her outfit, which detract from the overall aesthetics. Due to the price, I can probably overlook most of these flaws and enjoy keeping her on the display shelf.

A nice (but flawed) Arika

Moving on to Yoko. This is my first Yoko figure and I already have a confession to make. The top two reasons I bought the figure weren’t because of the fact that it is Yoko or that it was Kotobukiya. The main thing that swayed me to buy this figure was because of the display base. It’s a nice piece of clear acrylic and has a very nice look to it. Unlike a traditional stand that is attached to the figure, the base acts as a seat for the figure to rest on. The second reason I bought the figure was for the gun. Since it is advertised as 1/6 scale, I thought I could easily make use of the gun for posing with other 1/6 scales that I own. The Toysworks ARIA figures had sprung to mind, meaning that there will be photos of Akira Ferrari with a large rifle later.

Yoko and her accessories

The one really interesting thing about this particular Yoko figure is the sheer number of accessories and options she comes with. In addition to the gun (which itself requires assembly and has different options), she comes with 2 other hair clips with different faces, a second facial expression, and scarf. Going back to the gun, it can be assembled as either the full sized rifle or a more compact SMG (complete with bigger clip). I was particularly impressed with the level of detail in the rifle parts, each magazine contains a bullet at the top of the clip, there are details inside the battery pack, the barrel stand can be stowed or deployed, and the bolt action actually slides.

While most of the detail is pretty superfluous and is (unfortunately) hidden when the gun is fully assembled, it does beg the option of displaying the gun by itself and partially disassembled. Sadly, displaying Yoko without her weapon borders on blasphemy, so the only option is to leave her holding it and obscuring all that detail.

There really isn’t much to say about the figure itself. The sculpt is of the usual high quality I’ve come to expect from Kotobukiya and there are very few noticeable joins and seams. The figure I received did have one slight blemish in her side, but it is hardly visible without closer inspection. One thing I do like about this particular rendition is the faithfulness to Yoko’s character. Even with the alternate face, the expression and pose just feel like Yoko. While other renditions may be cuter or better made, they don’t seem to quite nail the aura as well.

Moving on from the figure, I want to talk about the display base. Yes, I am a real geek for wanting this figure for the display base, but you must admit… it’s a pretty novel design. At first glance, it doesn’t look like much, but it does have a very nice solid feel to it. It also has a completely smooth surface without any sort of mounting pins or studs to stick it to the figure. It is very well balanced so that Yoko can sit on top of it without worrying about falling over. The only flaw is that the manufacturer’s text and copyrights are printed on the bottom in white ink, which clearly shows through. 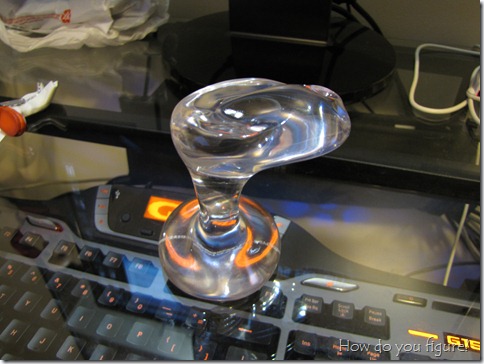 Having a clear base brings out a lot of opportunities for display. Since I use a glass display cabinet, it blends in nicely with the glass shelving and looks like it was part of the display. Also, it allows for light to pass through it, giving all sorts of possibilities. Shining a light from underneath creates a very nice effect.

Overall, I’m very happy with my first Yoko real Yoko figure (my first Yoko was a Nendoroid) and I’m expecting to receive the “Real Image" version later this year. Earlier on, I mentioned a little accessory swapping action. Here are the results… 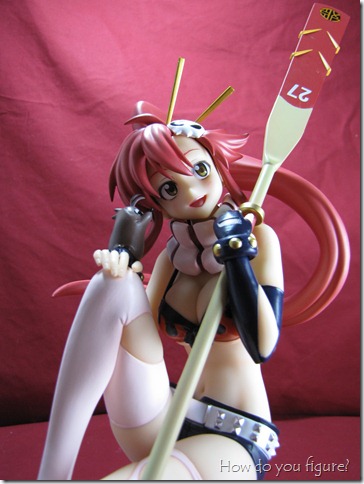 A couple words about these shots. First off, Aika better not slack off during practice. Akira is definitely prepared to exact punishment if she even thinks of relaxing… Second, between fighting beastmen and teaching school children, Yoko often moonlights as an Undine for Hime-ya. She’s often referred to as the 4th Great Water Fairy!

Be sure to check out the rest of the shoot at the gallery!

5 thoughts on “June and July arrivals”