The most common arrangement I have are shelves that are dedicated to one particular character. This sort of happened by accident, as I started to acquire multiple figures of the same individual.

Rin was my first attempt at arranging by character, given that Dollfie Rin was the perfect centerpiece to surround the others with. Of all the figures I own, Rin will probably always be my favorite.

Following Rin, I decided that Belldandy needed her display. Most of the figures came to me within the past year as a result of various sales from HLJ. The oldest of the bunch is the one in the very middle, which was one of the first figures I’d ever bought. I guess you can say that Belldandy is where it all began. 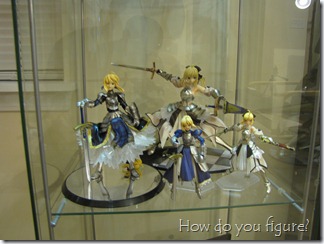 The Saber shelf was another shelf that happened by accident. After picking up Saber Lily and Saber Lily figma from Japan, I decided to rearrange and place them all in one place. I also tried to match the figma poses with their full-sized counterparts. The only thing that’s missing from this display is a Dollfie…

The Yoko shelf is another Dollfie-centered display. I’d actually planned this display in advance, starting with the Kotobukiya Yoko. Since Real Image Yoko was on preorder, I figured I’d stage the shelf before she arrived. Dollfie Yoko was a bit of an unexpected addition.

In addition to grouping by character, the next category I like to use is a “sort by series” approach. This generally means grouping all the figures from the same series and/or manufacturer.

There’s no better example of this than the two shelves dedicated to my ARIA figures. People often ask me why there’s some obvious empty space on both of these shelves. The answer is pretty simple… I’m reserving the space for the other two figures in the series, in case I’m able to eventually track them down. Given that they’re several years old at this point, I’m starting to lose hope on finding the girls from Orange Planet… 😦

The 1/4 scale Haruhi bunnies from FREEing are a prime candidates for being arranged together. Due to their size, it’s hard to fit all of them on one shelf. Mikuru has unfortunately been relegated to living on the shelf below with some other unrelated figures.

…and here’s Mikuru, sitting by herself away from the others. The expression on her face is pretty fitting for her circumstance… At least she gets to hang out with Shana (x2), Nadie, Haruka, and Iori. I don’t think they’d force her to do weird things like Haruhi would.

Here’s an interesting cross between a miscellaneous shelf, character shelf, and series shelf. The dominating presence is several different renditions of Narusegawa, but along side her are Haruka and Mitsuki from KimiNozo, Lena Sayers from Mai-Otome S.Ifr, an Sakura from Fate/Stay Night. I guess you could say there’s also a swimsuit theme going here…

…which brings me to the swimsuit shelf. There’s more Love Hina here, with Naru and Mutsumi representing. Kokoro and Kasumi from DOA and Fuuka from Yotsuba round out the bunch. The only figure that doesn’t fit is the figma of Konata…

…because she’s a duplicate and wouldn’t fit on the shelf with the rest of them. I guess you could say that Lucky Star is the dominant force here. The recent acquisition of the Summer Uniform set brings my figma count to 17.

Last but not least, here are the truly miscellaneous shelves. There really isn’t any real rhyme or reason as to why these figures are where they are, other than “that’s where I could find space for them.”

A couple of older figures, aside from Rose. I got her for a decent price from Play-Asia when they were clearing out stock.

Poor Holo, she’s by herself… for now. 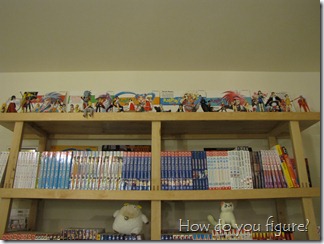 A truly miscellaneous bunch. Most of these are probably too small to be in a display case (at least efficiently). If you’re wondering what those things are behind them, they’re laserdiscs of the original Tenchi Muyo! OVA. 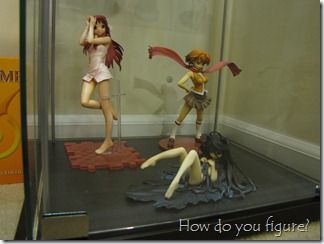 Shana really is everywhere, isn’t she? I also like the uniqueness of the Onda Aka figure in the back, I found her at a convention and decided to bring her home.

I don’t even know how to describe this picture. Ropponmatsu is a bit top heavy and will lean forward. Eventually, she’ll fall on her face. If I leave her like that for awhile, she goes back to her original shape and can be stood up once again. That probably can’t be good for he figure…

There we have it, a complete tour of the figures currently in my collection. I may have a couple older figures in storage, but those would be far and few between. Dollfies will also eat up a significant amount of display real estate due to their height. I’ve had to remove one shelf out of each case where there’s a Dollfie, just so they can stand. The results are pretty satisfying, though!

8 thoughts on “Taking stock of my collection”