I’m back again! This time with an insight into the various foods I ate while I was in Japan. Sadly, I didn’t bring a nice portable camera with me on the trip, so most of the photos were taken with my cell phone camera (main camera was a bit cumbersome to bring with me to dinner). 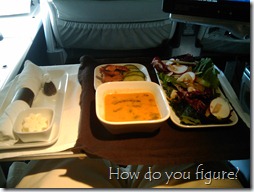 Of course, neither of the above actually qualify as food in Japan, as I was in the air over North America when I was served these. First was some lovely grilled shrimp served with a tomato bisque and greens. It was then followed by a delicious beef stir fry with cashews, and veggies. First class, FTW!

First and foremost, the Japanese love to eat and really enjoy variety. On some streets, you can count a dozen restaurants in each direction. Furthermore, each department store features a food area filled with smaller cafes that specialize in a variety of cuisine. From noodles to sushi, and culinary delights from all over the world, you’ll certainly find something you fancy.

My first real taste of Japanese food came late Friday evening after checking in. We went in search of a restaurant and wound up in Takashimaya Times Square, which housed Tokyu Hands, HMV, and Takashimaya. After browsing two floors worth of restaurants, we eventually settled on a tempura shop.

I ended up ordering one of the various dinner sets on the menu. While a la carte is available, most restaurants also offer set menus, which combine several smaller dishes into a full meal. Dinner consisted of some assorted tempura (small shrimp, giant prawns, squash, onion, and okra), rice, miso soup, and a little salad. One thing that was particularly interesting with eating tempura was that there are a variety of things to dip the tempura in beyond the standard tempura sauce. There were two types of shaved daikon radish that could be used as a topping as well as several different types of salts that could be used to enhance the flavor. Trying these different things out (apparently it is bad form to combine the toppings) and I’ll say I’m going to miss using the sauce when I have tempura in the states.

The next morning, we settled into a small cafe inside Shinjuku station. I’d had a craving for onigiri (rice balls), so we went to a place that made it fresh and served it with a variety of items.

As with dinner the previous night, this was an onigiri set. It came with my choice of onigiri (I picked salmon), a soup/broth (miso with sesame) and a small salad. For a little extra, I added a glass of orange juice. The American in me just couldn’t resist having a little OJ with my breakfast. Despite this being considered more of a fast food place, it was still plenty delicious. However, it was probably a bit pricey by American standards. This breakfast cost me in the neighborhood of 740 yen. A neat thing about this particular restaurant is the placemat it is sitting on. The rules for this establishment are clearly printed on it:

There is a place for you to hang your bag under the table, so it doesn’t have to sit on the floor. Pretty cool! 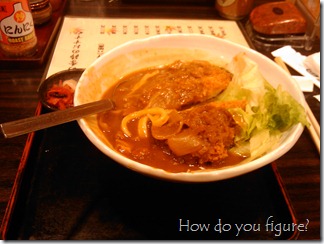 After a long day at TGS, it was back to Shinjuku for dinner. Eric brought us to one of his favorite restaurants in the area, which specialized in udon noodles. Skipping the traditional udon in broth, I went straight for what is called kare katsu udon, or udon noodles with breaded pork strips in curry sauce. It had some fresh sliced lettuce on the side to counter the soupy texture of the noodles and also served to balance out the mild spiciness of the sauce. It wasn’t overly hot, but rather just right to enhance the flavor. The pork cutlets also weren’t soggy, despite being soaked in sauce. Of all the meals I ate in Tokyo, this was probably one of the best. It was very simple, filling, and delicious.

Conveniences stores (or convi, for short), are a great place to get a quick bite to eat. They’ll typically sell everything from breads to instant ramen to premade sandwiches to onigiri. Most will also have a microwave and hot water pot for you to heat up your food and some will even have a small hot food counter that sells simple finger foods like chicken skewers, hot dogs, and steamed buns. I decided one morning to venture out by myself to pick up some onigiri and tea. Not being able to read Japanese, I grabbed two off the shelf, praying that I wouldn’t find anything extremely odd inside them. I managed to get one with salmon and one with some sort of veggie inside it. Both were delicious and I washed it down with some green tea. There are several major convi chains, including 7-eleven, AM/PM, and Family Mart.

Another thing that impressed me about the Japanese was their ability to take food from other cultures and adapt it to their own tastes. The crepe is a perfect example of something more European that has been given a Japanese twist.

This is one of the older stands in Harajuku. Each shop (and most restaurants in general) will have displays like this showing off their wares. They sell everything from more traditional types with fruit, whipped cream, and sprinkles, to more exotic types like curry chicken or tuna, cheese, and lettuce. The shop made it easy to order by having numbers next to them.

I went with something more normal: peaches with whipped cream and strawberry ice cream. Mmm!

Dinner that night consisted of going to what amounts to a drinking hall. These are typically places where people go to meet up for drinks after a long day at work. Each table is separated by dividers, giving each group some privacy. Since it is pseudo-traditional seating, shoes must be taken off prior to sitting down.

There was no formal wait staff at this particular place, as all ordering was handled via a touch screen that communicated with the main system wirelessly. It had several categories of food, including appetizers, light fare, fish, meals, and drinks. Some of the items came with pictures, though for the most part we just guessed at what we thought would be good. The screen also kept track of our tab and even split out the total if there were several people at the table. 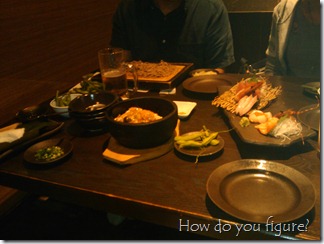 We wound up with quite a bit of food. I can’t exactly describe it all, though the thing with the little rice cakes in it (center bowl) was pretty tasty. We also ordered a variety of tofu (far left), some fish (far right), soba (top) and risotto (not pictured). As we ate, we realized we wanted some other stuff and continued adding to the tab. Pretty convenient!

Another convenient type of food is ramen. This isn’t exactly your $0.19 pack of noodles, but rather a 1000 yen bowl of pure deliciousness.

We stopped for lunch on Tuesday in a noodle shop outside Nakano station. This particular bowl was called the “special ramen” on the menu (which, by the way, was a ticket vending machine). It had all manners of good things in it, including corn, shaved lettuce, a boiled egg, sesame seeds, sliced pork, super tasty broth, and some ramen buried underneath. I’m sure this was more terrible for me than anything I’d eaten so far, but I put it all down anyway. It had been a long morning of walking, and I really needed the nourishment. I’m actually going to miss having good ramen now, though I think there’s a place in Charlotte that actually will do it well.