Last weekend marked the 4th annual Charlotte Dragonboat and Asian Festival. I made the decision to attend and support the Microsoft team in the pursuit of a medal position. There are typically several good showings at this event, including a few teams from outside of the area that ramp up the level of competition. Unfortunately, this never bodes well for those teams that are just good enough to make the top bracket and end up fighting for the consolation prizes.

Being that several of my co-workers were involved on the team this year, I decided to go along for the whole day. This meant waking up much earlier than usual and heading up to the lake for the 7am registration time. Since it is about a 30-45 minute drive, this meant I was up at about 5:30am.

CAUTION: this is probably one of the most graphically intensive posts I’ve done. More after the break!

Arriving at the lake and setting up the tent

The weather forecast for the day told us to expect some clouds and scattered showers. When we arrived however, it was just a bit overcast and no indication the sun would be coming out anytime soon. Still, fortune seemed to be on our side and there wasn’t any indication of rain. Shortly after 8, we had camp set up and the team began preparations for the first race. The first round was scheduled to start at 9 and was meant to divide the teams up into the different classes (A, B, and C).

Have to warm up before the race!

Each rowing team consists of 22 people: 20 rowers, 1 drummer, and 1 navigator. Since the boats are provided by the event organizers, a navigator is included. The rowers paddle the boat down a stretch of water against each other and the clock. Unlike with traditional rowing (like in the Olympics), the oars aren’t fixed, relying on the rowers to keep them in place and on track. As many teams discovered, synchronization has a far greater effect on speed than the power of the individual rowers. There were a couple of teams on the course this year that didn’t do so well in this respect, and fell behind quickly.

Boats line up for the first heat of the first round; Microsoft Dragonbytes are second from the left

The first run went extremely well for the team, coming in first with a time of 1m10s. At the end of the first round, we ended up 8th place overall, putting us squarely into Class A, where all the top tiered teams compete. The competition here is extremely stiff, with the top team turning times of 1m03s. They were professionals and one team even included all of the instructors for the rest of the rookie competitors! Once all of the qualifying rounds were sorted out, it was time to sort the classes. Bring on round two!

In addition to competing with the top teams, being in Class A also meant we’d be racing in the later heats of the day. Our second run didn’t begin until after 1:30, giving us plenty of downtime to explore the festival and hang out. Though since the first run was at 9am, people were getting anxious to get moving. The festival this year didn’t seem as crowded or have as many vendors in years past. Still, we managed to find some good food (a couple stalls had run out of some items) and have a decent lunch. There were also a couple of local vendors selling crafts and Asian-esque souvenirs. One of the vendors carried a small selection of anime goods (mostly mainstream stuff like Bleach) and had a bunch of plushies for sale. I was tempted by the giant Mokona plushies, but eventually settled on a more modest Chocobo:

Eventually, it was time for the next race. After a nice break of sun, something remarkable happened. The skies opened up and began dumping water. It wasn’t just a light mist or drizzle, but a full on downpour. This gave our rowers a little extra incentive to finish quickly and return to shore and ended up clocking a 1m09s. This being Class A, the time landed the team into the consolation round, where teams would battle for the 6th place prize.

Although we didn’t make the final race for the class, the team was determined to place in the consolation race. Rain continued on and off through the afternoon, though nothing as heavy as during the race. Most of the spectators managed to stay dry, but the rowers had just given in to being rained on and didn’t mind leaving the shelter of the tent. After a couple more hours of waiting, it was time to line up for the final race. Fortunately, the rain lifted as the boats hit the water and the sun came out in full force. 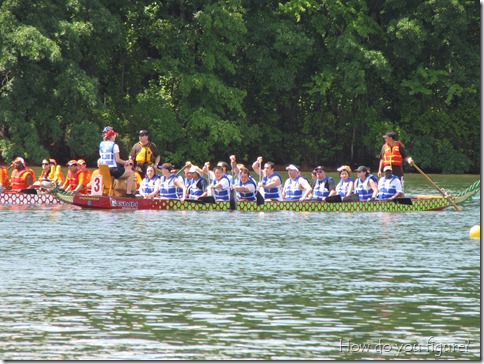 Using the power of the sun, we surged ahead in what was the team’s best run of the day. It was close at the beginning, but everyone got their act together and made one final push. The boat surged ahead, leaving the rest of the field behind to fight for second place. It was our best time of the day at 1m05s, which we later found out was on par with the overall top finishers in Class A. 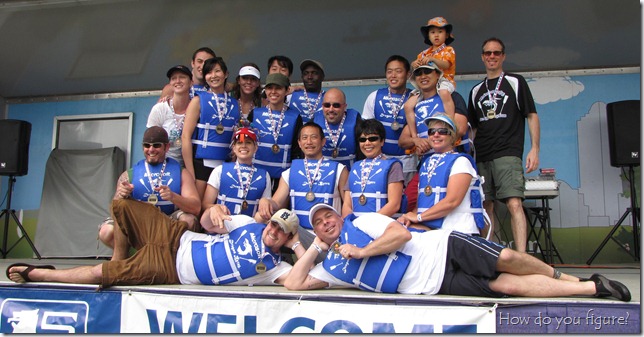 The last order of business for the day was to attend the award ceremony and receive the medals. There was plenty of fanfare for the winners and all of the teams posed for pictures. There’s no doubt we’ll be back next year and perhaps I’ll even join as an official member… but then who’ll take pictures and provide moral support?

3 thoughts on “There be dragon (boats)!”