In a slight departure from normal, this will be a light update. Not as much photography this year, although there may be a Photosynth coming in a couple days. We got a relatively early start this morning (left around 10am) to go see Tokyo Tower. Since it is scheduled to be replaced in a few years, we decided now was as good as time as any go up and visit it. 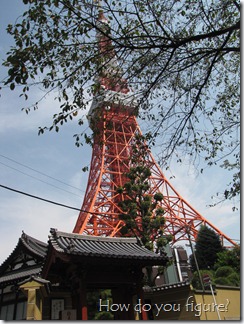 After seeing it blown up in so many different anime, it was nice to finally visit this landmark and see it in person. There was a bit of a haze today so visibility was limited.

I’ll eventually try to put together a Photosynth set from the pictures I took. I didn’t get a good 360 degree view from the observatories, so there’ll be some gaps. The picture above is of the Rainbow Bridge leading out of central Tokyo going towards Narita. 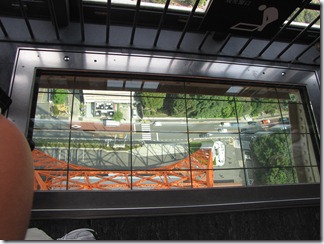 One of the other neat things in the lower observatory are the various “look down windows.” These probably aren’t for those afraid of heights, though I did see a couple of school kids jumping up and down on them. I did stand on it for a bit, but it felt a bit disconcerting…

After leaving the Tower, we headed back towards Shinjuku to have lunch with a Microsoft employee that worked in Tokyo. Since we both have similar jobs, I wanted to trade notes with him about the way our businesses are run. It sounds like we have a lot in common, despite working in different countries.

After lunch, it was off to Akihabara. I was really excited about this trip, and started getting nervous as we approached the station entrance. As the Mecca of the world, Akihabara is filled with stores specializing in garage kits, figures, video games, electronics, and anything else related to otaku culture. I didn’t get any pictures of the area since I was largely preoccupied with browsing, buying, and carrying the afternoon’s acquisitions. We spent a couple hours there today, which was more than enough to do some significant damage to our wallets. We’ll be going back for more tomorrow, as well as into Ueno and Nakano for more otaku shopping. Here’s what I came back with today:

I’ll leave it up to your imagination for now as to what I’ve bought so far. More on the loot later (probably when I get stateside). 🙂