She took awhile to track down, but I finally found the 1/4 scale FREEing Ryoko Asakura bunny figure for a decent price. Thanks to MooMooCow on Dannychoo.com, who made the decision to part with this beautiful figure and sell her to me for the great price of $125. Up until this point, I’d been scouting out eBay and other sites, but without much success. The lowest going price for a brand new figure had a minimum price tag of $150 plus shipping, with some listings going well into the $200 range. I like the Ryoko bunny, but I don’t like it that much.

First impression of the figure is that it’s almost as just as nice as the original product shots made it out to be. Once I got her out of the box, a couple of things immediately struck me. Her bunny suit isn’t as shiny as some of the product shots led me to believe. I’m not sure if that is normal or if it’s just this particular figure, but it was also not as glossy as the other bunnies I own. Second, she doesn’t actually lay flat on the table. There’s a slight bit of curve to the lower body, so the feet are slightly off the ground. I’ll chalk this up to just manufacturing and it really isn’t too big of a deal. Third, her head is not removable. With the other bunnies, the heads come off and are interchangeable. It seems that FREEing wanted Ryoko’s head to stay where it was. For the other figures in the series, this meant you could do some interesting head swaps. Haruhi with Mikuru-sized oppai, anyone?

The last thing that really got me about this figure was the sheer size. Since I already own two other bunnies, I was prepared to set aside some space to display the new one, but I had grossly underestimated the amount of space she’d take up. Since Ryoko is in a stretched out pose, she measures about 13in long from tip to tip. This meant I need to do some rearranging to actually fit her in the display case. Even with the adjustments, the trio look pretty nice when lit up… 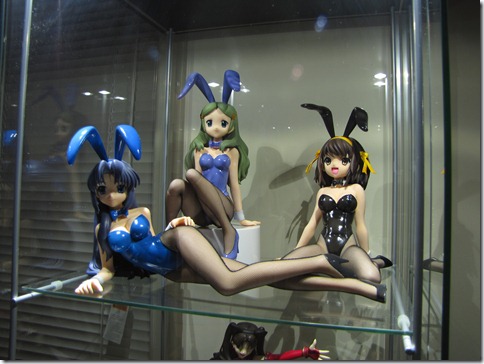 Once I got the display situated, it was time to take some photos. I hadn’t used the lighting setup in quite awhile, so it took me a little extra time to get things situated again and ready for use. I’d also never tried to shoot a figure of this size, so it was somewhat difficult trying to position the lighting and reflectors in such a way that they didn’t show up in the shots. I really should use a bigger table to do this stuff…

Reverse shot of the bunny tail 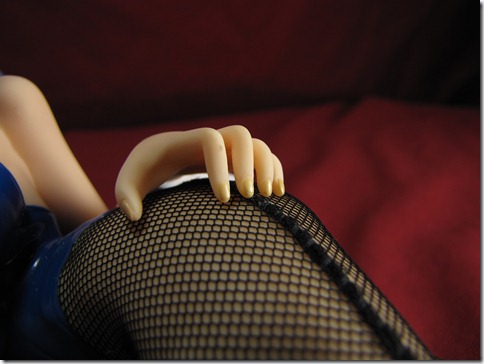 The FREEing bunny series used to pose an interesting dilemma for me. They’re some of the larger scale figures currently available, and I always told myself I’d never get one (or more accurately, be caught dead with one). Somehow, I’d managed to get both Haruhi and Emiri at the same time for good prices, when I really only wanted Ryoko. Strange how that works. Anyone out there considering getting any of the bunnies?