In yesterday’s post, I went into some of the daytime adventures from my trip to Seattle, so today I figured I’d focus on some of the ancillary events and things I didn’t have time to cover yesterday. Since this was a Microsoft event, most of our evenings were booked with networking opportunities with fellow employees. To facilitate conversation, copious amounts of food and alcohol were provided. More on that later, though since we did have two free nights to fend for ourselves, we decided to take advantage of a few great restaurants in downtown Seattle. 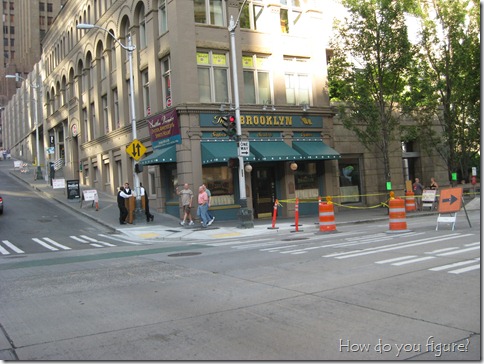 Outside the Brooklyn Seafood-Steak House

Being on Puget Sound, Seattle is host to a lot of excellent seafood. In years past, we’d always had dinner one night at the Brooklyn Seafood-Steak House on the corner of 2nd and University. Even though we were thinking of doing something different this year, we eventually found our way back on Monday evening. If you happen to be in Seattle and have a little money to spend on dinner (about $50 with wine and dessert), I would highly recommend checking out this little place. This year, I decided to have the Wild Alaskan Salmon and a cup of Clam Chowder. Unfortunately, I’d forgotten to take a picture of dinner since it looked so delicious and dug right in… I did manage to restrain myself on dessert and grabbed a quick shot before it all disappeared. 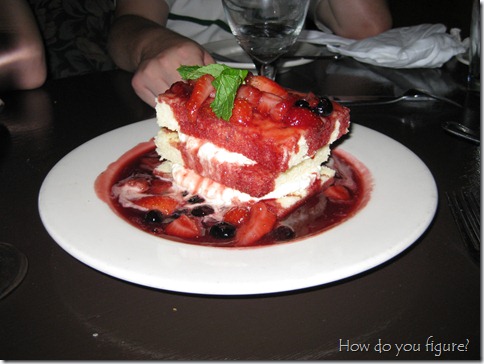 As delicious and rich as the food at Brooklyn once, we couldn’t indulge like that every night. Our second free evening was on Friday, where we headed down to the waterfront for happy hour. By then, the record high temps in Seattle had moved off some, with the day topping out in the mid-80s. With the cooler weather, the walk down to the water was very pleasant, considering the hill we had to go down. Fortunately, there was a set of stairs to help our journey… 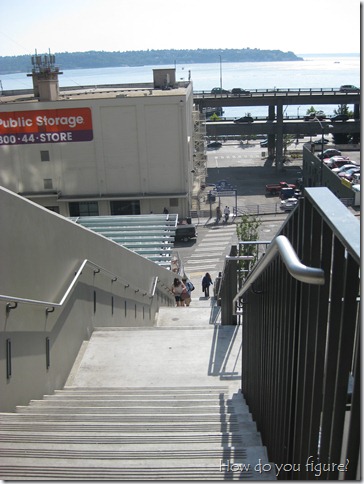 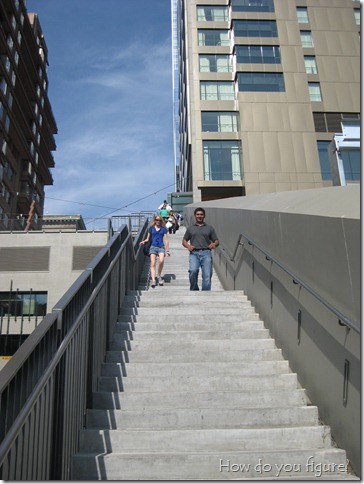 I’m not sure what the name of the place we walked into was called, but they did have some nice happy hour specials… $4 beer, $4 and $5 appetizers, and $6 sandwiches. They had a very interesting dish that combined whole fried shrimp with a Buffalo Wing-style sauce. While delicious, I opted for a much more conservative popcorn shrimp along with a Sam Adams. I didn’t want to eat too much, since I had reservations for an awesome little Japanese place called Maneki.

Sadly, I don’t have any photos of Maneki either, since I’d left the camera in the hotel room. If you enjoy good Japanese cuisine, I would recommend you check this place out. They are a relatively small restaurant, very authentic, and relatively inexpensive. Their sushi rolls usually come in at under $5 each and most entrees under $10. This combination of cheap and delicious makes them extremely busy, so reservations are almost a necessity. They only take reservations on the same day, so you have to call in the morning and leave a message. They then call you back and let you know if they can accommodate at the specified time or suggest an alternate time. We’d originally called for a table at 7:30, but were later told we could only be fit in at 8:45.

But what Microsoft event would be complete without a couple of parties? The remaining 3 nights were scheduled for us with events. Tuesday night featured a smaller get together for the workgroup I belonged to. This was held at Jillian’s, however it seemed their air conditioning wasn’t working that night. It was extremely hot and stuffy inside the building, making for a somewhat miserable experience. As one of my coworkers put it, “at least the beer is cold.”

Wednesday featured “Ask the Experts” night, a chance for us common folk to pick the brains of people from the various product team. It also meant opportunities to get some free swag, though this year featured less than in the past. Again, lots of free beer and food.

Thursday featured the big attendee party. This year, it was held on Microsoft campus, so we were all loaded up on busses and headed into Redmond. The trip itself took about 30 minutes with minor traffic, though the ride was beautiful in itself. The drive over Lake Washington was a sight to behold! 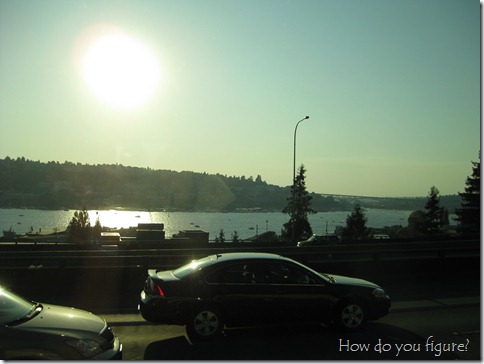 Cruising along WA520 over Lake Washington 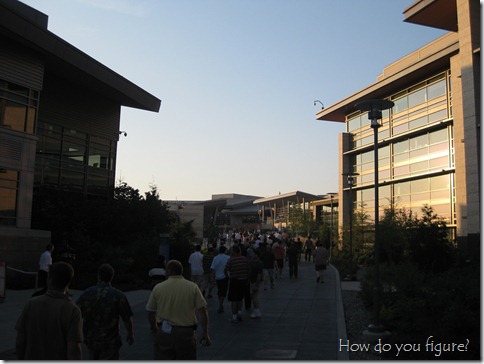 Arriving at “The Commons” on Redmond Campus

There was quite a bit to do, as most of us had never been to the newly built recreational area on campus. It featured several restaurants, a pub, sports fields, shops, video games, the new Microsoft Visitor Center, and of course the Microsoft Company Store.

The Spitfire Pub and Bar 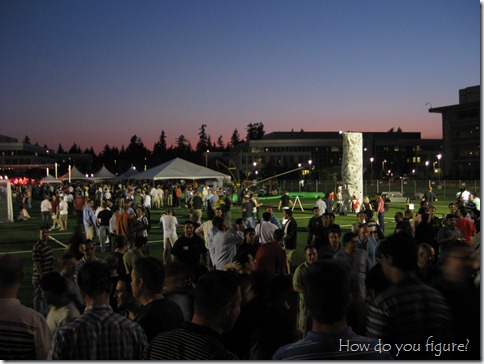 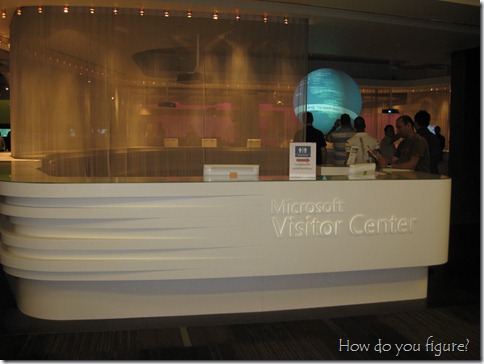 Inside the Microsoft Visitor Center 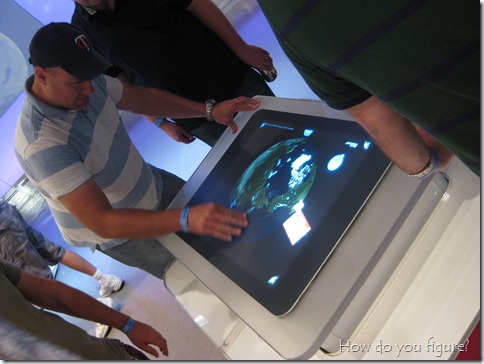 Playing with Bing Maps on a Surface

In all, it was a very exciting, eventful, and educational week. I’m glad that I have the opportunity to attend this event every year and catch up with some folks I don’t normally see on a day to day basis. There was, however, one snag in the whole week. After a near perfect trip, the whole thing came crashing down when I got on the plane to come home.

Originally, my itinerary took me from Seattle to Charlotte via Phoenix. Due to an extremely short layover in Phoenix, there was a serious time pressure to catch the next flight. Unfortunately for me and several other travelers, there was a slight delay coming out of Seattle and none of us made the connection to Charlotte. It seems that the airline realized this midflight and had automatically rebooked us all on a different connection.

Instead of flying directly to Charlotte, the “next best thing” was to fly to Sacramento, CA (which was in the wrong direction) and then take the redeye to Charlotte. The flight from Phoenix would arrive Sacramento around 7pm and the connecting flight departed around 10:30pm. To make matters worse, the shops and restaurants in Sacramento Airport closed at 7, meaning very little chance to get something to eat. Even the bar closed at 8, meaning a very short window to even get something to drink. Fortunately (or unfortunately, depending on how you look at it), Burger King stayed open until 10pm. The WiFi was also free, which gave ample time to surf the internet and upload a Photosynth of Seattle taken from my hotel. The addition of the redeye flight also meant a severely delayed arrival home. Instead of getting back to Charlotte at 9:30pm, I got in around 6:30am. By the time I retrieved my luggage and got home, it was pushing 7:30am and I was ready to pass out.

Despite the hitches, I had a great time last week! I look forward to doing it again next year. I’ll just be sure to book non-stop flights both ways… 🙂